The periodic table (also called periodic table of elements or Mendeleev's table) is a table that shows an organized arrangement of the 118 chemical elements according to their atomic number.

The manner at which elements are arranged on this table reveals some similarities in their electronic configurations and chemical properties.


On the periodic table, atomic symbol of elements are used to represent each element. As an instance, the element sodiun is represented as Na.

Note: The atomic number of each element of the periodic table can be seen on the top left (or on top) of each atomol symbol. Also seen are the elements' atomic mass just below the atomic symbol.

Atomic mass is the sum of protons and neutrons in the nucleus of an atom.

Below is a diagram that shows the periodic table of elements:

Classification of elements on the periodic table


The vertical columns of the periodic table are called the groups. They are present in the 'up - down' direction of the table.

The groups are 8 in numbers (numbered I, II, III, IV, V, VI, VII and VIII). They appear to be the most significant criteria in the classification of elements in the periodic table.

Most of the elements within a group have similar chemical properties and share a common name. For instance, the group VIII elements are referred to as the 'noble or rare or inert gases' while groups I, II and VII are called alkali metals, alkali earth metals and halogens respectively.

Valence electrons(s) is/are the number of electron(s) in the outermost shell of an atom. It is shown in the image below: 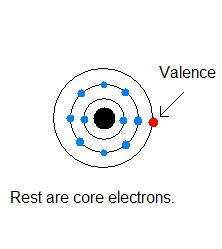 The outermost electrons (valence electrons) determine the chemical behaviour of elements, giving rise to the basis of the periodic law.

The periodic law states that the properties of the elements are a periodic functions of their atomic numbers. To simply put it, elements with the same valence electron(s) will tend to chemically behave in a similar way.

You can read on an introduction to Organic Chemistry here.

Note: Electrons revolve round the shell.

As we go across the period, the number of electrons increases by 1.

Elements in the periodic table are also classified into blocks depending on the electrons present on the outermost shell of the of elements. For this reason, we have the following blocks of elements:

You can read on Salts in Chemistry here.


Apart from the above classifications, elements in the periodic table can further be classified as:


As a student, understanding the chemical properties and trends that elements share within the groups and periods is crucial.

The chemical trend seen in the periodic table include: