Topics in CCNA Routing and Switching

A good knowledge of the Open Systems Interconnection (OSI) is fundamental for those willing to take up a career in networking.

Networking engineers will look up to the OSI model as a reference when working on the different layers of their job.

The OSI model is a reference model that defines and describes the various protocols, concepts, terms and functionalities in networking.

The OSI model clearly explains the process of networking in seven layers.

Below are the seven layers of the OSI model:

Note: A similar networking model to the OSI model is the TCP/IP Model or TCP/IP Stack or Department of Defense Model (DoD Model).

With regards to modern day networking and internet, The TCP/IP model is the preferred choice. In fact, computer networking today uses only the TCP/IP stack in its implementation.

The term internet is actually derived from 2nd Layer of the TCP/IP stack.

The TCP/IP Stack has 4 layers unlike the OSI Model which has 7.

Note: Although the OSI model of networking is no longer supported by computer hardware manufacturers, It’s still crucial you understand how each of its layer work since its knowledge is applicable in network troubleshooting and comprehension. 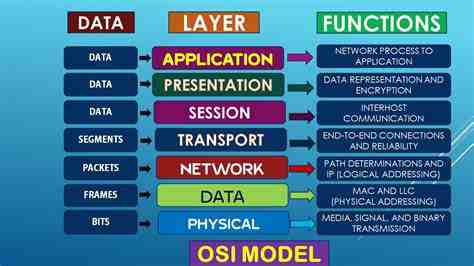 Table showing the summary of the OSI Layers and their Functions

Functions of each Layer of the OSI Model

Below is a summary of the functionalities of each layer, beginning from Layer 7:

Layer seven or the application layer of the OSI model is where an end user begins from when they intend to get information from a web server located somewhere on the internet. For instance, you were able to read this article because the application layer had been put into use through your phone or computer.

To prove this, take a look at the Uniform Resource Locator (URL), which happens to be the link of this page on your browser.

Notice the https protocol from the above URL. It could be http in some other websites. This protocol is always present in the application layer regardless the website you visit; you will just happen to see either of the protocols because that’s how the internet had been designed to work at the application layer.

Note: HTTP stands for HyperText Transfer Protocol while the "s" in HTTPS means that the protocol is secure.

Other protocols found at the application layer include:

Please read on the Internet and World Wide Web here.

Before you could read this article; its content (arriving from the web server where it’s located) had to be presented on your screen. If this article had been encrypted from the server (for security reasons), then you probably would have seen an encrypted gibberish, but all thanks to the presentation layer.

The Presentation layer helps to encrypt and decrypt data while also formatting text or images like ASCII, EBCDIC, PNG, TIFF, GIF, PICT, JPG and so on.

The presentation layer presents data on your computer screen.

The session layer is responsible for starting, managing and terminating network connections between two or more computers.

Protocols found on layer 5 include the followings:

Note: Layers 5, 6 and 7 are expected to be handled by the computer programmer while the responsibility of layers 1 – 4 lies in the operations of the networking technician.

The function of the transport layer is achieved through two main protocols. They are:

The transport layer is responsible or either a connection or connectionless oriented data transfer.

When information is transferred in a connectionless manner, it only mean that both connecting computers did not partake in an initial three way handshake or connection setup before the communication began. As a result, there is no sequence number, acknowledgement number and flow control associated with this connection; hence the name "connectionless".

In a connectionless communication, one of the communicating computers sends data or information to the other computer without any prior notice to the latter. If something happens to the sent data along its way (probably traffic was heavy along its path or route) and it was unable to reach the destination computer, then such data will be lost (not delivered to the destination computer or device); and there won't be any retransmission of the lost data.

The above paragraph explains why we sometimes hear gabbled or distorted sounds in voice communications. (This is so because the specific voice data could not reach its destination device; and there's no retransmission of the lost data).

Voice data are transmitted in a connectionless manner because it happens in real-time.

The UDP protocol is responsible for connectionless communication.

The TCP protocol is responsible for connection oriented communication.

In a connected oriented protocol, There is an initial three way handshake between both computers before the communication (data transfer) proceeds.

For now, just think of a three way handshake as an agreement or negotiation of the communication parameters between two or more computers before information or data exchange can proceed.

Sequence Numbers, Acknowledgement Numbers and Flow Control are all associated with the TCP’s connection oriented communication.

Note: The Protocol Data Unit (PDU) at the transport layer are called Segments

The main protocol in the network layer is the Internet Protocol (IP).

IP can be either IPv4 or IPv6.

Other layer 3 protocols include Apple-Talk, DECnet and IPX. (All are obsolete at present).

Routers and Layer 3 Switches are devices found in the network layer of the OSI. For this reason, they are often referred to as Layer 3 Devices.

Please read on Routers and their Functions here.

Functionalities of the Network Layer

Below is a summary of the network layer functionality:

Functions of the Data Link Later

The data link layer is responsible for the following functionalities:

Note: The Ethernet functions at both the Data Link layer (layer 2) and the Physical Layer (Layer 1) of the OSI model.

The Physical layer is responsible for the transmission of electrical signals, light signal and radio signals.

The Protocol Data Units are call Bits in layer 1.