Mixtures and Separation of Mixtures - part 3

As discussed in the previous articles, a mixture is composed of two or more substances physically combined.

In this article, we will continue with the various separation techniques but if you desire, you can read from the beginning of this topic here.

Fractional distillation is a method used for separating a mixture that contains more than two miscible liquid; and with a close range of boiling points.

A typical example of a mixture separated via fractional distillation is petroleum or crude oil.

Note: If the difference in boiling point is greater than 250C, a simple distillation should be used.

Crude oil contain various fractions and these can be separated via fractional distillation.

The fractions of crude oil/petroleum are listed below from the most volatile to the least volatile.

For now, think of a volatile substance as one that has a lesser boiling point and is easily evaporated at normal temperatures.

The image below shows the process of fractional distillation as seen in an industrial environment.

Seen in the image are: 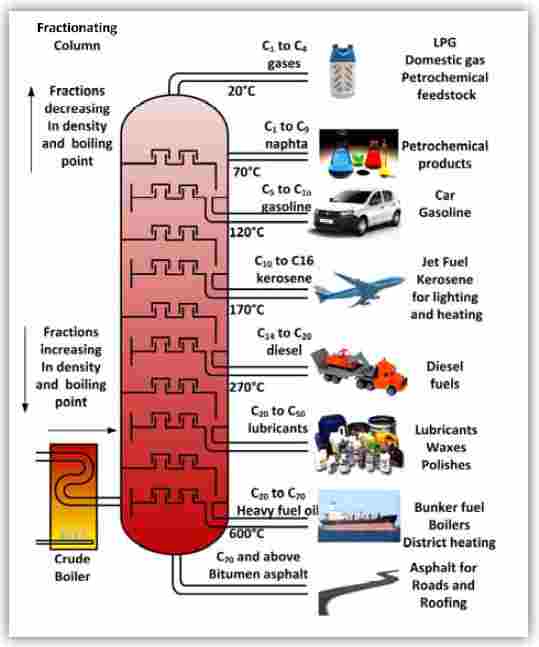 Note: Notice that the gases (at the top of the fractionating column and with lower boiling points) are the most volatile while bitumen asphalt (at the bottom) is the least volatile.

The image below shows the process of fractional distillation as seen in a laboratory: 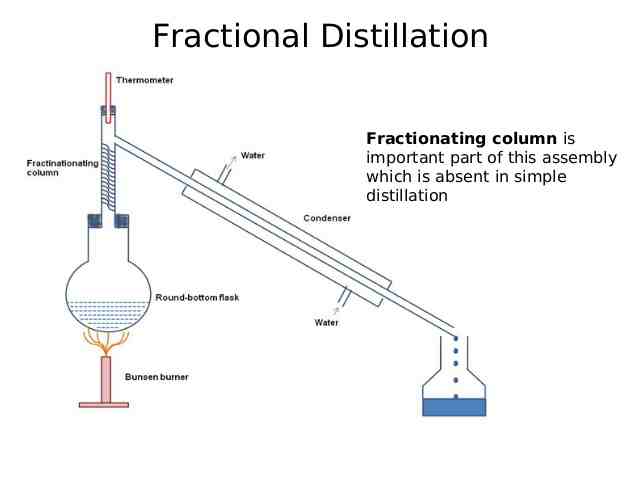 An important apparatus that makes fractional distillation possible is the fractionating column.

The fractionating column functions to separate the mixture (crude oil in our instance) into its fractions (or constituents) based on the differences in their boiling point and volatilities.

Note: The fractionating column is absent in simple distillation.

You can read on simple distillation here.

Precipitation is a method used to separate ions in aqueous solution.

Consider an aqueous solution as one that contains water as its solvent.

Now, if two ions are present in an aqueous solution; let’s say copper ions (Cu2+) and silver ions (Ag+); one of the ions can be precipitated out if we added another solvent (for instance hydrochloric acid or HCl) into the aqueous solution.

Please read on Acids - Their Physical and Chemical Properties here.

The "precipitated out" substance or solid (or ion in the above instance) is termed a precipitate.

Note: To "precipitate out" (or simply precipitation) means to bring about the deposition of a substance in its solid form from a solution.

Below is the equation for the reaction:

Please read on the Introduction to Electrolysis to get the concept of Ions.

The diagram below shows the precipitation of lead ions (Pb2+) and iodide ions (I-) as lead iodide (PbI2) in the reaction between lead trioxonitrate(V) - Pb(NO3)2 and sodium iodide (NaI2). 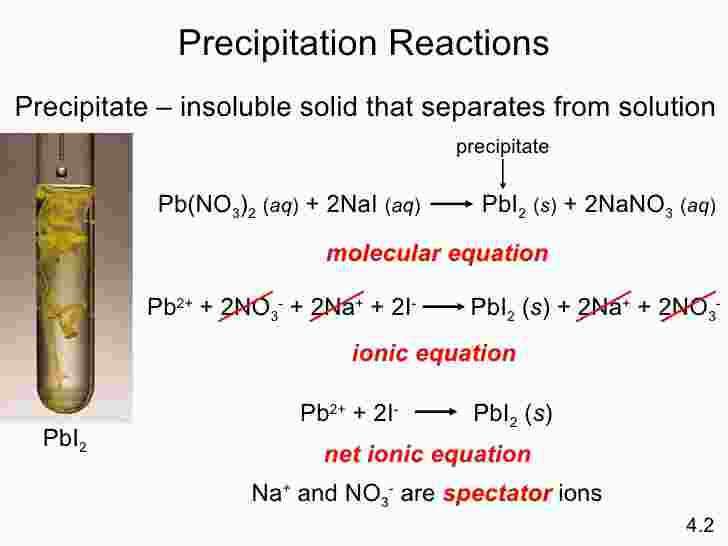 Note: The process of precipitation can also be applied in the purification of impure compounds.

Other techniques utilized in the separation of mixtures are:

Magnetization or Magnetic Separation is used to separate substances that are attracted to magnets from those that aren't.

A mixture of iron filings and sulphur can be separated via magnetization.

The above statement is valid because the iron filings will be attracted to a magnet while sulphur particles remains unattracted inside the container.

Crystallization is a separation technique used for separating two salts with different solubilities.

In crystallization, the less soluble salt is crystallized out of solution.

Crystallization is also used for the purification of a soluble salt that contains insoluble solid impurities.

It is used to separate components of a complex mixture in solution, for instance ink.

Below are some types of chromatography: