The rate of change of momentum is proportional to the applied force and will take place in the direction of that force.

The above statement is attributed to _____.

The process whereby the velocity of an object increases and decreases over a period of time is best associated with the term _____.

Consider this expression below:

A body X exerts a force FX on another body Y. In return, body Y exert a force FY back on body X. The forces FX and FY are equal in magnitude but opposite in direction.

Putting the above expression into equation:

Where FX is the action force

FY is the reaction Force

The above expression relates to _____.

The tendency of a body to remain in a state of rest or in uniform motion is referred to as _____.

A change in the position of an object with reference to time is best described as _____.

The saying 'what goes up on earth must come down' can be best attributed to _____.

The term radiate in English mean to “to spread out from a central point”. For instance, the light from the sun radiates to the earth. Also, a lighted bulb will radiate its light in a dark room.

The term radiation (heat radiation) can simply be defined as the transfer of heat in the form of electromagnetic waves.

Note: Whenever heat is transferred via radiation, a contact surface will not be required between the heat source and the object being heated. In this case, the heat is transmitted through space.

One reason why some people put out their bulbs before they go out is to simply conserve energy. Leaving on the bulb will bring an extra heat into the room where it’s present.

Please read on the Concept of Heat and Temperature here.

Consider the points below regarding radiation through a lighted bulb:

This process of heat transfer from the bulb to the room is a concept of radiation.

Please read on the Concept of Heat Transfer here.

The image below shows how heat is radiated to earth from the sun's solar energy: 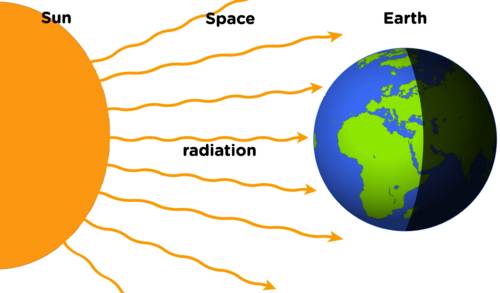 All objects (televisions, phones, phones, computer and any other object) radiate energy in the form of electromagnetic waves. The rate at which this energy is released is directly proportional to the Kelvin temperature (T) raised to the fourth power.

The hotter an object is, the more its ability to radiate heat energy.

The radiated energy is a collection of a range of wavelength referred to as emission spectrum.

The wavelengths within the spectra of the emitted radiation will decrease when the temperature of an object increases; and as a result, hotter objects will usually emit a shorter wavelength at a higher frequency.

The fastest animal on land is Cheetah. It can reach a maximum speed of about 113km per hour.

The study of Thermodynamics revolves around the relationship between heat, temperature, energy and mechanical work; and these can be summarised under the 4 laws of Thermodynamics (Numbered zero through three).

You can read on the Food Chain here.

Fuses are present in many electrical devices. They are basically 🔥 fire-breakers 🔥

If there is a power surge, the fuse will break, preventing damage to the electrical devices. It will also prevent the incidence of 🔥 fire🔥 on or from such device.

Physics is one of the core sciences.

Physics is defined the scientific study of matter and the movement of matter through the space and time of the universe.

Understanding the basic and fundamental concepts of physics will help you better comprehend this subject. Below are some of the concepts: