In chemistry, chemical equilibrium is often referred to as dynamic equilibrium.

Recall that the word 'equilibrium' in English refers to a state of balance or stability. However, dynamic equilibrium in chemistry focuses on the stability of reaction rate between reactants and products in a chemical reaction.

You can read on the differences between static and dynamic equilibrium here.

Note: Chemical or Dynamic equilibrium will only occur in a reversible reaction which is always denoted by the forward and backward arrow signs (⇌). An instance is shown in the formation of ammonia (NH3) via the Haber process.

Reversible reaction is a type of reaction whereby the reaction can proceed in both directions (forward and backward direction).

You can read on periodic table and classification of elements here.

The image below shows the processes that results into dynamic equilibrium: 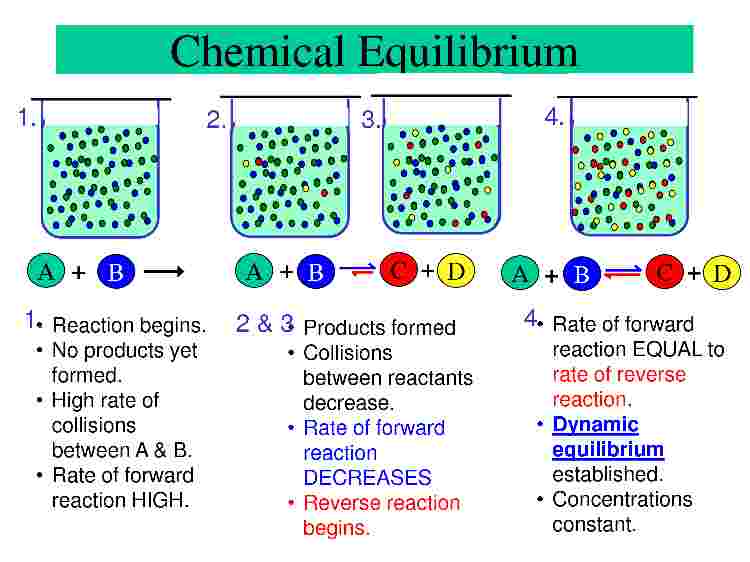 You can read on chemical properties of matter explained with examples here.

Dynamic equilibrium does not commence at the beginning of a reaction. The forward reaction must first proceed; that is, the reactants collide or react in order to form the products. After some time, the backward reaction also proceeds as the products begins to react, forming back the reactants. This forward and backward reaction continues differentially until the both reactions proceed at the same rate. At this point, dynamic equilibrium is said to be reached.

You can read on elements and their characteristics here.

A reversible reaction must occur in a closed system for dynamic equilibrium to be attained. This ensures that neither the reactants nor products are lost during the chemical reaction. As an instance, iodine is a substance that sublimes (that is; changes directly from solid to a gaseous state when heated).

When iodine is heated in an open container, it sublimes into gaseous iodine which escapes into the atmosphere; and there will be no way for the backward reaction to proceed.

You can read on the states of matter and characteristics of solids here.

However, if the heated container was sealed (in a closed system), the iodine crystals sublime into a purple iodine vapour, and both the crystals and vapour remains inside the container until a chemical equilibrium is reached. 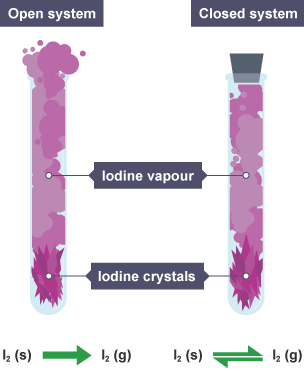 Please read on sublimation and other separation techniques here.

Note: The concentrations of both the reactants and products must remain constant and not necessarily the same when dynamic equilibrium is reached in a system.

It is important to state that factors such as 'a change' in concentration, pressure or temperature will affect or alter the dynamic equilibrium in a system. This was explained by a French Chemist named Henry Louis Le Chatelier. It was his principle - 'Le Chatelier’s Principle, also known as the Equilibrium Law' that explains the aformentioned changes, predicting their effects on a system in dynamic or chemical equilibrium.