Postulates of kinetic theory of gases

Metals are referred to as _____ in their impure state.

Metals generally have the quality to shine, glow, sparkle, glitter, reflect light and be polished. This characteristic of metals is termed _____.

An understanding on the concept of the kinetic theory of gases is considered a vital part of chemistry. This is true because chemistry involves the study of matter and the changes they undergo. In this regard, gaseous particles are always in motion (moving). In fact, the word kinetic means 'in motion'.

It is noteworthy to state that gases are comprised of a large number of separated submicroscopic particles at the atomic and molecular levels. According to the kinetic theory of gases, these extremely small gaseous particles are always in a constant, rapid and random motion which occurs in a straight line. While in motion, the gaseous particles will constantly collide with one another and the walls of its container.

In the 19th century, the kinetic theory of gases was established by the great works of British scientist - James Clerk Maxwell and Austrian physicist - Ludwig Boltzmann, in an attempt to study their behaviors.

The kinetic theory of gases further explains how properties like pressure, temperature, viscosity, thermal conductivity and volume impact on the movement of various gaseous molecules.

You can read on Dalton's atomic theory and its modifications here.

Gaseous molecules present in a container are not static. They are in constant motion. In fact, if the container is opened, the gases will escape (or move out) from it. For this reason, we see why released gases escape into an open space. This random movement in a straight line is a major characteristic of gases since their comprising atoms or molecules are extremely small and widely separated.

Also, the forces that tend to attract the gaseous particles are very small or neglible. In summary, gas molecules are constantly and randomly moving in a straight line. This is in support of Newton's first law of motion.

With regards to gaseous molecules as material bodies, they obey Newton's laws of motion. This means that the molecules of an ideal gas will move randomly in straight lines until they collide with each other or with the walls of the container. This is shown in the image below: 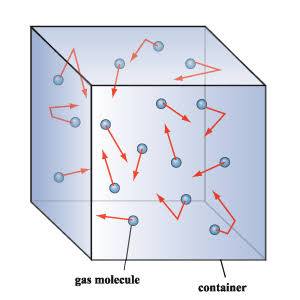 2. The collision between gas molecules are perfectly elastic

Whenever gas molecules collide or come into contact with one another, they do so in an elastic manner. This implies that the colliding gaseous molecules bounce off one another, changing their directions and kinetic energies in the process.

Meanwhile, understand that gas molecules do not adhere to each other when they collide. This is also true whenever they collide with the walls of the container. In a similar fashion, they bounce off the container and do not stick to it.

You can read on periodic table and classification of elements here.

3. The actual volume occupied by the gas molecules are neglible

Each particle or atom that make up a gas is very small (microscopic). Also, they are widely separated from other gaseous particles.

Focusing on this particle, the actual volume it occupies in the container is extremely small (or even neglible). For this reason, the particles can freely move and collide since there exist a massive space within the container.

It is noteworthy to state that gas particles are separated by a large distance in relation to their particulate size. In this regard, if the container was opened, the gaseous particles will escape completely because of the massive space in the atmosphere.

You can read on the functions of the atmosphere here.

In summary, the average distances of the gaseous particles are much greater than the sizes of the particles themselves.

You can attempt various questions in chemistry here.

4. The cohesive forces between the gas molecules are neglible

As explained earlier, gas molecules are constantly in motion and will always collide with themselves and the walls of the container. However, there is no interactive force (that is, force of attraction or repulsion) between the gaseous particles.

Recall that solids have their particles adhering closely to one another. In fact, this is why solids have definite shapes and fixed sizes with static particles. In other words, the cohesive forces in solids are great. This is not the case in gases.

You can read more on the states of matter and characteristics of solids here.

With regards to gases, the particles are widely spaced apart and are also constantly moving. Based of this fact, gases have no definite shape since there is no cohesive or binding forces between its particles.

5. The average kinetic energy of the gas molecules is directly proportional to the absolute temperature

The term 'average' is very significant in this theory. Now, let's imagine a gas is present inside a sealed metallic container. Based on our previous kinetic theories, the gaseous molecules will be in constant motion within the container, giving rise to an average kinetic energy of the overall gas molecules. Meanwhile, recall that the word 'kinetic' means moving or in motion.

Now, let's imagine that heat is applied to this container. When this happens, the gases will move at an increased speed (motion) and collision will be consequently increased. In short, a higher temperature will imply a higher speed and collision between the gas molecules themselves, alongside the gas molecules and the container's walls. The reverse will happen if temperature is decreased by putting the container in a refrigerator. In fact, at an absolute zero temperature, the gaseous particles will cease moving. 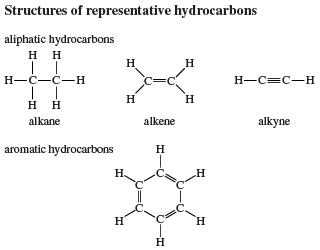 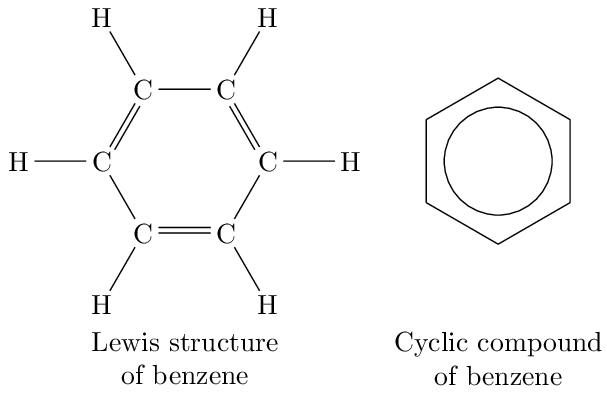