According to Brønsted Thomas Martin Lowry, an acid is defined as _____.

Consider the analogy below:

Diffusion is fastest in gaseous particles. This is due to the fact that gaseous particles are able to move freely since the cohesive or binding forces between them are extremely small or negligible.

Please read on the Characteristics of Solids, Liquids and Gases here.

Diffusion is technically not the same thing as effusion. Diffusion always accompanies effusion; with both happening almost simultaneously.

Effusion is the movement of gaseous particles through a very small opening; and is always accompained by diffusion.

For instance; when an inflated balloon is pierced with a needle, both effusion and diffusion will occur.

When diffusion occurs, it continues until equilibrium is attained. This will imply that; from our previous instance, the scent of the perfume will continue to move from the region of higher concentration to the region of lower concentration until every part of the room becomes equally filled, (assuming all external openings have been shut).

Note: When a gas has a high rate of diffusion, it will take a shorter time for diffusion to occur in such gas; (that is, it will diffuse rapidly).

Conversely, diffusion will take a longer time for gases with lower rate of diffusion; (that is, such gases will diffuse slowly).

Graham’s law of diffusion states that the rate (r) of diffusion in a gas at a given temperature is inversely proportional to the square root of its density or molecular mass (m).

Below is an equation on Graham's Law of Diffusion. 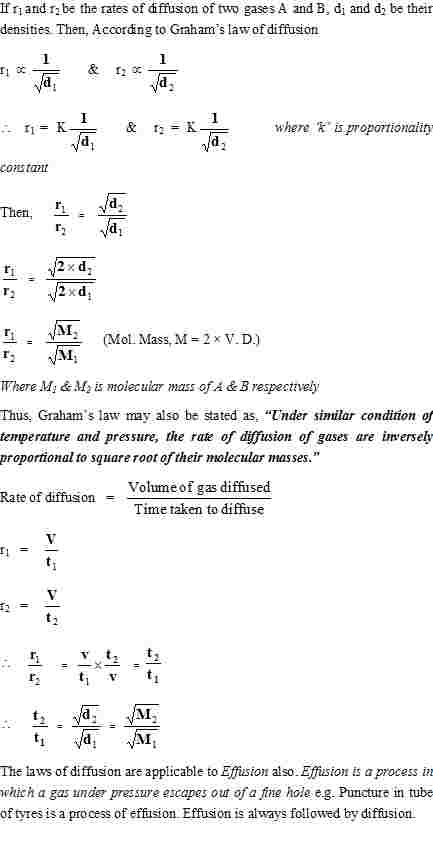 Also Note that: "The vapour density (v.d) of a gas is equal to half its relative molecular mass(r.m.m).

30cm3 of a gas with an empirical formula of CH3 diffuses through a porous partition in 45.2s. If 30 cm3 of hydrogen diffused in 11.7s under the same conditions. Calculate:

(i) Vapour density of the CH3 gas

Using the formula derived from the above diagram:

Let's substitute these values into the above formula: