Concept of Ions and Electrolytes

According to Brønsted Thomas Martin Lowry, an acid is defined as _____.

This implies that ions are formed from atoms.

The group one elements (in the periodic table) have got 1 valence electron and will undergo chemical reaction by donating it out to attain an octet or duplet configuration.

Please read on Periodic Table and Classification of Elements here.

Regarding elements with 1 valence electron, it will require lesser energy to give out its 1 electron towards attaining stability (octet configuration) rather that accepting 7 electrons.

In fact, no element in the periodic table will donate or give out 7 electrons to begin with.

Please read on Elements and Characteristics of Elements here.

A positively charged ion is called a cation and it's formed when an atom donates electron(s) in chemical reactions.

Sodium atom (Na) will give out its 1 valence electron to form sodium ion (Na+). Please see the diagram above.

Conversely, group seven elements (of the periodic table) have 7 valence electrons and will undergo a chemical reaction by accepting one electron to attain an octet configuration.

A negatively charged ion or anion is formed whenever an atom accepts electron(s).

You can read on Dalton's Atomic Theory and its Modifications here.

Note: An octet or duplet configuration is a state whereby atoms or ions have the maximum of eight or two valence electrons. They are stable as a result and do not need further reaction with any other element.

In short, all elements undergo chemical reaction in order to attain the octet or duplet configuration.

If the attainment of an octet or a duplet configuration is achieved via the transfer of electrons, then an ion will be formed.

Chemical reactions or bonds that involves the transfer of electrons are termed ionic or electrovalent bond.

Please read on Salt and Types of Salts in Chemistry here.

We have 2 types of ions. They are:

A cation is a positively charged ion. Examples are Na+, H+, K+, Mg2+, Ca2+ and so on. They will move to the negative electrode during electrolysis.

An anion is a negatively charged ion. Examples are Cl-, F-, O2- and OH-. They will move to the positive electrode during electrolysis.

The positive electrode in electrolysis is referred to as the Anode. Therefore, the anions migrate to the anode during electrolysis.

You can read on the Physical and Chemical Properties of Acids here.

Electrolytes are defined as solutions or molten compounds or paste like compounds that conduct electricity. Examples are brine (a concentrated solution of sodium chloride) and calcium hydroxide or Ca(OH)2.

The image below shows the process of electrolysis. The electrolyte is composed of ions (cations and anions) which will eventually migrate towards their respective electrodes. You can read more on electrodes here. 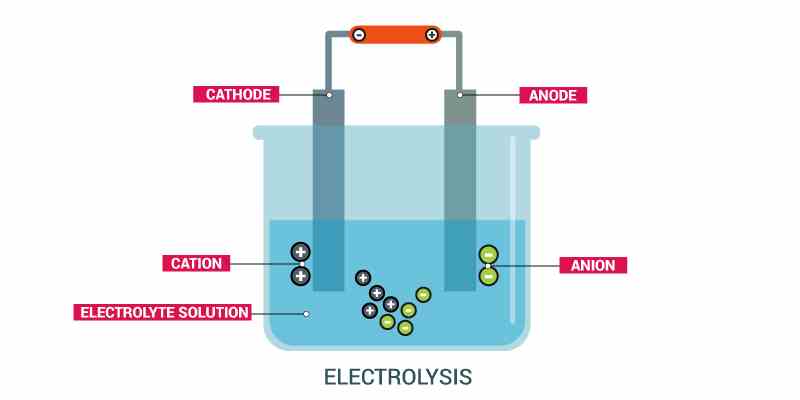 Electrolytes are composed of ions. The ions that makes up an electrolyte are always dissociated during electrolysis.

During the process of electrolysis, electrolytes will dissociate into its constituent ions; and will migrate to their respective electrodes when an electric current is passed through it. This process of dissociation is summarized in the ionic theory.

The strength of dissociations of the ions present in an electrolyte will determine whether the electrolyte is strong or weak.

We have 2 types of electrolytes. These are:

1. Strong electrolyte: They dissociate completely into their constituent ions when electricity is passed through them.


2.Weak electrolyte: They dissociate partially into their constituent ions when electricity is passed through them.

Please read on the Introduction to Hydrocarbons and Organic Chemistry here.