26. The fleshy base of a flower to which the different floral parts are attached is known as

27. When a short-sighted person views a distant object without spectacles, the image is formed 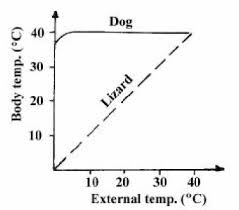 The graph shows the relationship between the body and atmospheric temperatures for dog and lizard.

What is the most appropriate deduction that could be made from the graph?

29. The part of the brain that controls heart beat and breathing is the

Use the list of ecological constituents below to answer questions 30 and 31.

31. The physical factors are represented by

32. Which of the following sets is made up of decomposers?

33. The correct order in a food chain involving the organisms below is:

34. The organisms with the least number of individuals in a pyramid of numbers are the

Use the list of blomes below to answer questions 35 and 36.

35. A biome with a low annual rainfall, few scattered trees within dense layer of grasses and found in Kano and Katsina States is

36. A biome where small mammals undergo aestivation for long periods is

37. Ecological sucession ends with the formation of a stable

38. In a drought situation, plants suffer from water stress which could result in

39. The water-retention capacity of a soil indicates its

40. People who suck petrol with their mouths run the risk of increasing in their blood the concentration of

41. The differences and similarities among living things account for

42. People with sickle-cell anaemia have haemoglobin

43. In the gene locus for eye colour in humans, the allele for brown eyes is dominant over the allele for blue eyes. If a homozygous brown-eyed girl has a brother with blue eyes, what are the likely phenotypes of their parents’ eye colour? (Eye colour is a sex-linked trait).

44. If a woman’s genotype is Tt Qq Rr, what would be the gene content of her eggs?

45. The sex-linked defect in which very slight cut produces severe bleeding is known as

46. A man who has the trait for colour blindness marries a normal woman. What percentage of their children would be sufferers, carriers and normal respectively?

47. Breathing root is an adaptation for survival in the

48. Red coloration on the head of a male lizard helps it to

49. A phenomenon by which an animal goes into a state of dormancy during the dry season is called

50. The anatomical evidence usually used in support of all evolutionary relationship among whales, humans, birds and dogs is the possession of