Electromechanical Energy: Parts of the Refrigerator and how they operate

Which of the following is not a type of maintenance?

Which of the following is incorrect concerning preventive maintenance?

What is Electromechanical Energy?

Electromechanical energy consists of two forms of energy. These are:

In this article, we will explore on the refrigerator and it’s mechanism of operation.

You can read on Chain Drive, Their Advantages and Disadvantages here.

The Refrigerator as an Electromechanical Device

The refrigerator comprises of both the fridges and deep freezers whose functions serve the storage of edible material and other substances. They also function to keep food substances cold for the satisfaction of people and for commercial purposes.

Medical and Chemical industries use the refrigerator to preserve drugs and other important chemicals at a temperature in which the various decomposition micro-organisms are unable to act.

Parts of a Refrigerator

Below are some of the major parts or components that make up a refrigerator:

The diagram below shows the major components of a Refrigerator: 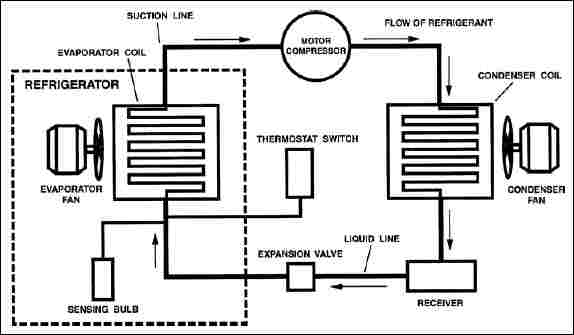 The refrigerant can be a liquid (fluid) or gas (vapor), and it runs throughout the various tubes or compartments of the refrigerator.

The refrigerant (fluid in this instance) flows throughout the entire pipes of the refrigerator. This fluid refrigerant would expand from its liquid state into a vapor state (becomes vapor refrigerant because it takes in heat from its surroundings), thus bringing about the cooling process inside the fridge or freezer.

The refrigerant (fluid) absorbs heat from the substances to be cooled (present in the evaporator). As a result, the fluid refrigerant becomes vapor.

Conversely, the condenser condenses the refrigerant (vapor) into liquid (fluid refrigerant). This process will be explained in a latter part of this article.

Both aformentioned processes repeats itself in cyclical manner; and is referred to as the refrigeration cycle.

The evaporator is the cooling chamber where food materials are kept in the refrigerator. It acts by extracting heat from the food items in order to bring about their coldness.

The evaporator is a heat exchanger and it's made up of several turns of coil (made of aluminium or copper). The evaporator simply refers to the coil in the refrigerator where cooling and freezing is achieved.

It is within the evaporator that the refrigerant absorbs the heat from the substance to be cooled.

Note: The evaporator is also called the freezer or the chiller.

The compressor acts by sucking the gaseous or vapor refrigerant from the evaporator; as it releases it at a high temperature and pressure.

The sucking/pumping action of the compressor occurs from the low pressure evaporator to the high pressure condenser.

Note: The compressor is driven by an electric motor which makes it the major power consuming part of the refrigerator. 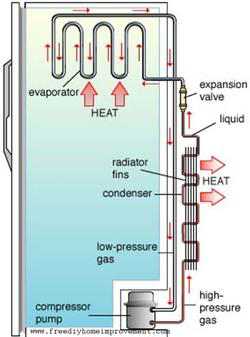 The condenser comprises of a series of arranged pipes or (coils of copper tubing) at the lower posterior end of the refrigerator, from where heat is lost to the atmosphere.

The compressor pumps the refrigerant into the condenser where it is cooled by atmospheric air. The condenser thus absorbs heat through the aforementioned process.

Note: Since heat is extracted by the condenser, it becomes very hot as a result.

In short, the condenser condenses the gaseous refrigerant (changes its state to from gas to liquid).

Please read on the States of Matter (Solid, Liquid, Gas and Plasma) here.

As soon as the gaseous refrigerant enters the capillary or expansion valve, its temperature and pressure drops, as it cools again. This cooling refrigerant cools the evaporator as it flows through the pipes in the evaporator.

The expansion valve is also called the capillary.

This is the temperature controlling device on the refrigerator. Recall that temperature is the degree of hotness or coldness of a body.

Please read on the Concept of Temperature and Heat here.

The thermostat consists of a sensor connected to the evaporator. The (settings) on the button of the thermostat can be adjusted in the compartment of the refrigerator where it is located.

As the name implies, the defrost system of the refrigerator functions to remove excess ice from the surface of the evaporator.

Note: The thermostat button can also be used to achieve this function when it is pressed. 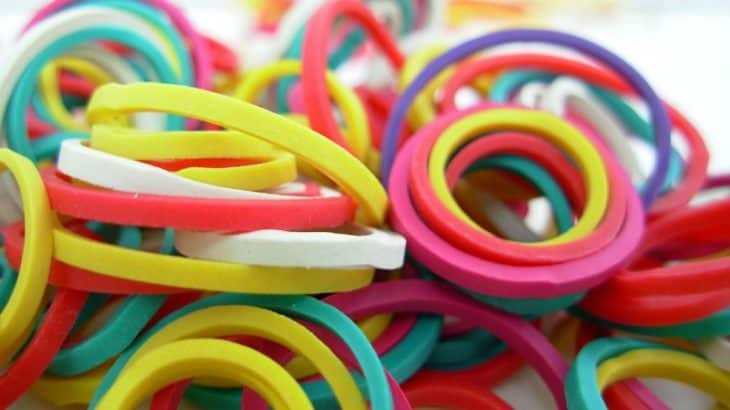 Preventive maintenance is carried out routinely on a device even though no apparent fault may be present on such device.

The goal of preventive maintenance as the name suggest is to prevent a sudden breakdown on a device or equipment.

As an instance, a person who services his or her car monthly even though the car is still able to function correctly is said to be carrying out preventive maintenance on the car.

In the course of a preventive maintenance, worn out parts may be discovered and replaced as soon as possible. Also, there may be a change of oil while other little adjustments may also be carried out.

We can even carry out preventive maintenance on our body to prevent certain diseases. For this reason, some persons have discovered cancerous cells in their body through regular medical checkup; and were able to kill such cells before they become malignant.

As a matter of fact; immunization is a form of preventive maintenance. 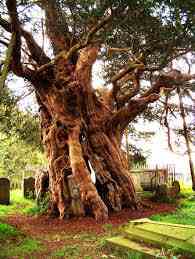 Hardwoods are derived from angiosperms. They show the following characteristics:

Ceramics are refractory. They also require a very high amount of heat and subsquent cooling to be formed.

Being refractory means that they are capable of withstanding a variety of abuses like high temperatures and chemical attacks.

Ceramics are generally made by taking clay from the ground and mixing it with water. It is then shaped into any form and fired inside an oven (called kiln) at a very high temperature. They may then be decorated with a waterproof, paint-like substances called glazes.

Ceramics may have constrasting physical and chemical properties (or characteristics); but in general,