A female chicken less than one year old is referred to as a _____.

Small plants that grow via vegetative propagation from the parent plants are called _____.

The female part of the flower comprising the stigma, style and ovary is the _____.

Which of the following food is best preserved through pasteurization?

The total number of parasites that are present in a host organism is termed  _____.

All plants are crops.

Soil erosion is defined as a process that removes the topsoil through agents like water, wind, man and animals.

Below are some explanations on the various causes of soil erosion:

Rainfall is a natural cause of soil erosion. During the course of a "heavy downpour", the force at which water droplets hit the soil may cause the breaking of the top soil and a resultant penetration of water into it. This can result in the exposure of the soil’s contents.

On a hilly land, a gully may be formed when water runs downhill. Subsequently, the runoff water creates a deep channel into the soil, giving rise to the gully erosion. This is shown in the image below: 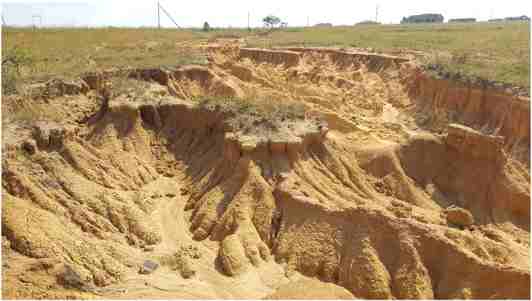 The runoff water also flushes the topmost nutrients of the soil down its path, depositing them into the riverbed.

A strong wind will bring about the loss of the topsoil, especially on soils whose structure had already been loosened up by erosion.

The chances of wind erosion are further enhanced when the land is bare (that is, not covered with plants or vegetation). For this reason, wind erosion is common in the desert (arid land) and lands with sandy soil. 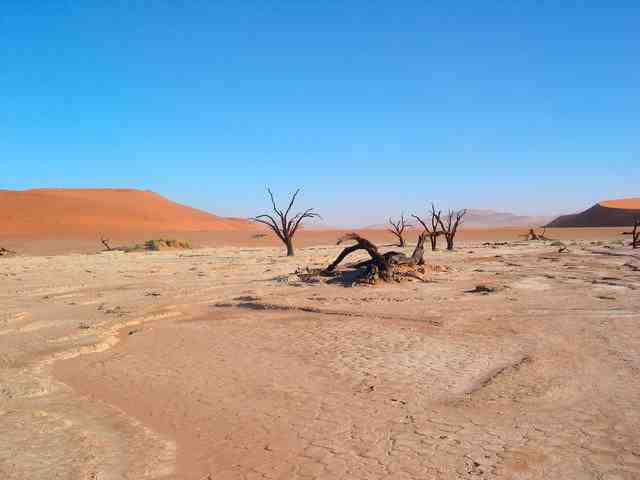 Image of a Desert Biome

Note: Of all soil types, sandy soil is most susceptible to wind erosion due to its porous soil structure.

The presence of a vegetation cover on a land aids in protecting it from soil erosion.

Vegetation cover on a land may be achieved by planting grasses, legumes or small green plants (generally called cover crops) on the land.

Please read on the Differences between Plants and Crops here.

Below is an image of two lands. In this image, the land (left) is not protected by cover crops while the land (right) had been been protected through the planting cover crops. 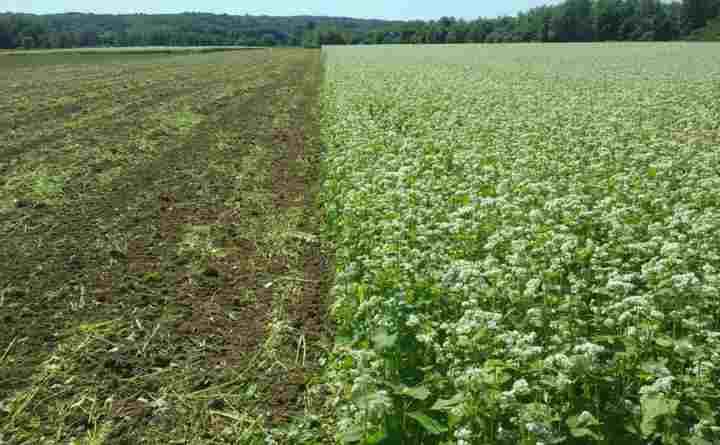 The soil in forests have also got vegetation cover in the form of tall trees. These tall trees act as wind breaks, thus protecting the soil from water and wind erosion.

When a land is constantly ploughed, its soil becomes susceptible to erosion. This is true because the particulate nature of the soil becomes exposed to water and wind erosions.

To plough a land means to loosen its soil in preparation for sowing or planting.

Please read on Agricutural Tools and their Uses here.


5. Sloppiness of the Land

The degree of sloppiness of a land will determine the level of soil erosion. For instance, a hilly slopped land is more likely to be eroded from runoff water as it moves down the slope.

The image below shows a sloped land: 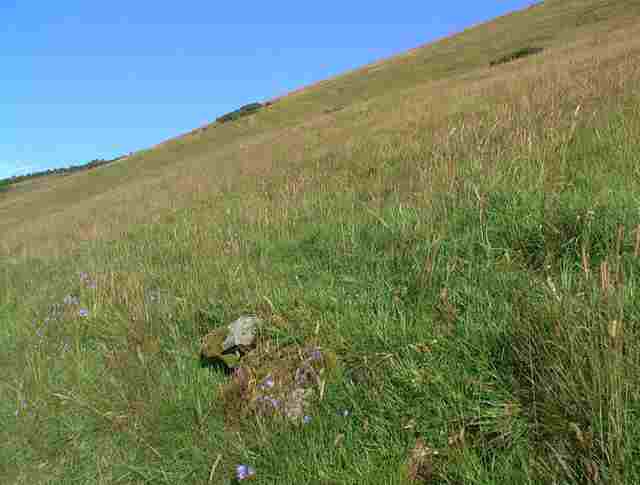 You can read on Agricultural Land and its Uses here.

Crop rotation is a system of farming whereby different type of crops are grown on the same piece of land from one planting season to another.

You can read on Agricultural Terms and Meanings here.

The continuous planting of one type of crop (termed mono cropping) on a piece of farmland will result in the loss of nutrients on the soil of such farmlands. Soils whose nutrients are lost are unable to support the growth of plants (vegetation cover); thus becoming exposed to water and wind erosion.

Overgrazing is said to occur when cattle, sheep and goats excessively feed on plants present on a piece of land.

Overgrazing removes the vegetation cover from the top soil, subsequently exposing it to water and wind erosion.

You can read on Asexual Propagation in Plants here.

Deforestation is a process whereby forest trees are cut down in a large scale.

Recall that the presence of forest trees on a farmland serves as protection from wind (termed wind breaks). In addition, the roots of these trees firmly hold the soil together thus preventing it from been lost to wind erosion.

Eventually, the topsoil in a forest whose trees had been cut down become exposed to water and wind erosion.

Although plants neither see nor hear, they can recognize their siblings and even give them preferential treatments 🤔

Squirrels do plant more 🌲 trees 🌲 (through their actions) than an average human in their lifetime. They often hide their acorns and nuts underground and forget about them 😁

🐄 Cows 🐄 have got the ability to walk up stairs, but not down stairs

There are about 630 different kinds of carnivorous plants.

Carnivorous plants are plants that derive some or most of their nutrients by consuming small animals, especially insects.

Some example of carnivorous plants include sundew and Venus flytrap.